From The Castle Doctrine Wiki
Jump to: navigation, search

A lot of the ideas and techniques have been captured from the [forums], such as [this] thread.

A Commit Gate is simple to build: using a single power source, sticky pressure switch, and electric floor (or powered door) that activates the electric floor once the robber moves across. This effectively commits the robber to that path once crossed.

Since animals only move once they see the robber, creative use of windows, cats, and dogs can result in seemingly impossible activation (or deactivation) of traps as the animals move behind walls and step on switches.

The idea is, you don't know what's beyond the door until you open it. When you do, if you are unprepared, you are screwed. Best placement for these types of traps is so that your screen doesn't scroll until you enter the door.

A pit bull trap where a pit bull gains line of sight on you through a window, then follows you to a door where the moment you open the door, you die: 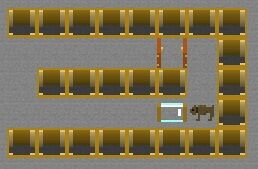 The idea behind this one is that, a pit bull cannot pursue you the same move where it makes line of sight with you. So putting the pit-bull directly behind the door deters you, but does not kill you since you are able to walk away. Using this construction, the pit bull makes line of sight first and thus can attack you the moment you open the door.

Since the view is only drawn once the player is within 3 squares of the edge, you can force traps and behavior to trigger: 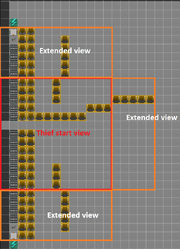 The other classic is the leap-of-faith. Read up on precedence on the wiki if you want to understand this one.

Meaning you can step on to an electric grid which is powered on, then the pet moves onto a button, then the state of the electric floor (and your Schrödinger charred corpse) is determined.

I especially like the variant on this below, which has been ripped straight from my current vault:

This works on three levels. At the newbie level, opening the door at the top and seeing the scary pit incites them to turn around and go back the other way, where a cunningly inviting corridor filled with doggy death doors awaits them.

On the intermediate level, the fellow comes along and sees an unpowered trap door. But then he spies the dog, who will move down a tile when he does, hitting the button. So he bravely steps out into empty space, only to land heavily, crushing his legs and dying a lingering death.

Why did he die? Because there isn't actually any power coming into the pit from the dogs side. Instead the power to the trap door is turned on by doing a little magic dance somewhere far, far away in the maze. Oh, and incidentally this trap door works as a double bluff when it has been powered on. Because the even more eagle eyed expert viewers will notice that's a toggle pressure switch (starts on) which the dog is about to step on, which if they're wrong could switch off the power after all... 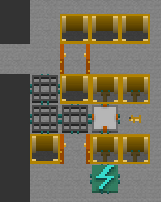 Player walks into the house from the right. Up the top, there's open ground (with scary family protections and lots of dogs, maybe an electric door in plain view). Through the door could be anything, maybe even an angry pitbull!

So, because of his initially limited visibility, he takes a step down onto the first grid which doesn't seem to have any power. He sees the third grid around the corner, but figures he's still safe. However when he moves on to the second grid, suddenly the little doggie sees him and gets agitated. If he moves backwards, he gets fried. If he moves right, he gets fried. The only ways out are:

So, for $250 you have a basic trap which potentially costs $400 to circumvent. Upgrade the dog to a pitbull, you then have the choice of either drugging him and leaving a landmine in the passage, or spending $1,200 to shoot him.

I'd say this one basic trap accounts for maybe 15% of the deaths in my house. Most of them in 4 moves.

Combination locks are easy to build and difficult to guess without tools. They take up far less room than a multi-path maze and can be easily modified to change the "success" combination to thwart scouting.

You can make locks that need buttons pressed in order, or have the same button pressed multiple times as well. These become much more difficult to brute force, but also require more difficult electronics that take up valuable space.

(credit: [okami316]) Just as a variant that prevents brute force, here's a compact version of what I've used before.

The lock is the same, but they can't simply cut the power for the electric floors or doors due to the powered trap doors also losing power. electric floors and powered doors are interchangeable, just changes the necessary tools to brute force. Also, having it against the wall would prevent breaking the wall from the other side for the code.